What do you think of twitter and blog contests?  Miss Snarks 1st Victim is doing another round of secret agent critiques. People submitted their first 250 words and she posts them on her blog. At first anyone can critique them. After that agents come through and comment on entries they like, ask for submissions or whatever.

She was going to post 50 but only 40 people submitted. Now, I know not everyone has a ready manuscript that fit the qualifications, still, it was a little sad not more people took advantage of it. I think she has a form to submit entries so it shouldn't take more than 10 minutes either. That's less time than it takes to get a query ready to go.

Are these type of contests the way of the past? Or are people just not hearing about them? I should have posted or tweeted some sort of link or reminder to help spread the word but honestly, I didn't even think about it. And that's a problem.

If you want, you can head over and read some entries, and read the critiques of any in your genre or that you think you can learn from.  Maybe, you'll be ready to submit next time around.
Posted by S.P. Bowers at 2:54 PM 13 comments:

We were having a nice spring, enjoying the warm, balmy days, getting outside. Now the other side of a Colorado spring has sprung. 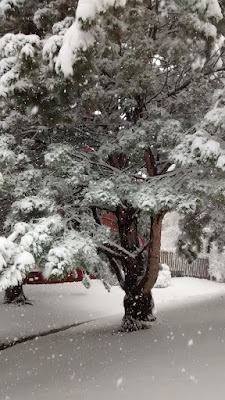 Last I heard we were supposed to get around 3 inches.

We have at least 12 with more coming down. It's spring break so the kids were already out of school. We're just hunkering down, enjoying a TV day, with a pot of chili on the stove and fry bread rising.

I hope that wherever you are, and whatever the weather, you're safe and content.


Last year, before we moved, we had a yard sale. Mini-Engineer decided he wanted to sell something and earn money, too, but he didn’t want to sell any of his own belongings. So he drew a bunch of pictures and offered them to people who came to the sale. For $3 each. Yeah. His belief in his drawing skills may be overrated.

I could have stopped him. I could have told him no. Instead, I let him. Before the sale we talked about how people would be looking for cheap prices, and that they would bargain. Then I stood back and let him try. I knew he would be turned away and rejected. I knew that he would have disappointments, but I also hoped he would have victories. He approached the people on his own, negotiated on his own, though I kept a watchful eye. Some people did buy his pictures, not for $3, but they were sweet and nice and those good points got him through the rejections. Even better, he learned what he can do if he tries, that he can live through rejection, and that he can keep trying after failing.

It was hard to stand back and let him do this on his own. One of the hardest things I’ve ever done. But I know it was in his best interest. I also know it’s a necessary part of his growth. I try to keep this in mind through the query process. This is an important lesson, and hard as it is for me, no matter the outcome, I know I’ll be better at the end of it.
Posted by S.P. Bowers at 3:29 PM 12 comments:

My blog used to have a bio and picture of me to the side. I don't know where they went, or when they left. I don't know how they were removed or why.

Once again I am reminded that writing isn't just about writing. Writing is the most important part of writing, but it's not the only part. There's marketing, promotion, research, networking, studying the craft, and tech support. If you use a computer at all this last one is pretty important.

What do you do that's part of writing, but isn't actually writing?

I've often heard that if you want to be an author, you need to treat writing as a job. I know that many writers push themselves, feeling that if they're not writing they're not making progress, not getting paid.  And to a certain extent that true. We do need to take writing serious if we want to do this professionally. We can't treat it like a hobby.

However, professional doesn't mean 24/7 in most cases. The Engineer has weekends off work. When he comes home he doesn't agonize over blueprints and obsess over airplane parts. Generally, that is. Farmers let fields lie fallow sometimes so it can regain nutrients and produce better crops.

As writers, we need to take time off. We need to let our minds lie fallow for a bit. And we need to stop beating ourselves up about it. If we push too hard, we face burnout. Just like anyone in any profession. Take care of yourselves, and remember that you need time off work every now and again.
Posted by S.P. Bowers at 2:55 PM 13 comments: